If you happen to watch home TV shopping channels, then by chance you may have seen the Micro Touch Razor and how it claims to be a better razor than those that are sold in the groceries and elsewhere.

The razor industry has introduced to us various razor shapes and sizes that aim to provide the best and cleanest shave so people will look and feel good after every shave. Because of this, consumers become more and more confused in finding the right razor that can work best for them.

What are Micro Touch Razor Products?

Razor manufacturers try to be better than their other competitors by introducing innovations in the razor products like better-shaped handles and multiple blades for faster shaving. While we believe that the more blades there are on a single razor to provide a faster and closer shave, the Micro Touch Razor products promoted on TV shopping channels claim otherwise.

The Micro Touch Razor products claim that going old school with a razor that has a single blade is still the best way to shave.

In the TV advertisement, they have Rick Harrison from Pawn Stars to support their claims where he gives his honest testimony about this product. In this article, we will discuss whether the Micro Touch Razor is a great razor that can provide individuals the shave that they want even with a single blade.

Micro Touch razors are getting a huge following among razor users simply because this type of product promises to provide a clean shave even with a single blade. If you are wondering whether a Micro Touch razor can work for you, read the features of the following products:

Unlike the majority of the disposable and refillable razors manufactured by the leading razor companies nowadays, the Micro Touch Safety Razor Chrome contains only a single razor blade.

The product company in the TV advertisement claims that a single razor blade provides the same, if not a better and cleaner shave than what the leading razor brands can provide.

Since the Micro Touch Safety Razor is designed just like the older razor models, users who purchased and used this product report that you will need to give some time to get used to using this product.

For one, you will need to hold the handle at a 45-degree angle to prevent cutting your skin and achieve a great shave. Furthermore, when you shave, you should shave along the grain and not against it.

Using little pressure when holding and shaving with this razor is the best way to shave. Users suggest that it is better to pass through the hair and skin for one to two times than using heavy pressure to cut hairs in a single pass.

Furthermore, since the Micro Touch Safety Razor is made like the old-school razor models, achieving a clean shave should be done by doing a wet shave process. This means that you should have a rich lather on your skin from your shaving cream or gel before you shave.

When purchasing this specific product, you will be able to save hundreds of dollars’ worth of needing to buy razors and refills because of the 12 precision blade refills that come in the package.

The length of time that a single blade refill can last depends on how often you shave in a week. For those who shave daily, changing and refilling their Micro Touch Safety Razor blades will be more often than those who shave less frequently.

Still, no matter how often you will need to replace the blades on this razor, you are still saving money as compared to other razor products that use three to five razor blades that produce the same results but cost more. 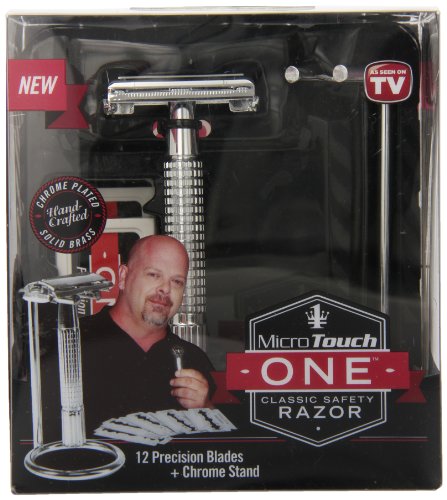 A summary of the Micro Touch Safety Razor Chrome features are

Another Micro Touch razor model is the triple-blade razor which can also be seen on TV shopping channels. This razor claims to provide a cleaner and closer shave with its triple blade cartridge.

According to advertisements, the three German-engineered stainless steel blades are specially designed to provide the best shaving experience that you need without the hassle.

The first blade lifts the hair, the second blade cuts its, and the third blade finishes the cutting. You can do your shaving at any angle without the fear of having razor cuts.

The Micro Touch Triple-Blade Razor has a micro-thin and non-stick coating on the surface of the stainless steel blade to help protect and prolong the blades up to four times longer. Also, you can use this razor against or along the grain of your hairs without experiencing razor cuts.

Changing and replacing the cartridge can also be done in a few seconds by simply pressing the button at the back of the razor head to release the old cartridge. The new razor cartridge will click in place easily so you can start shaving. 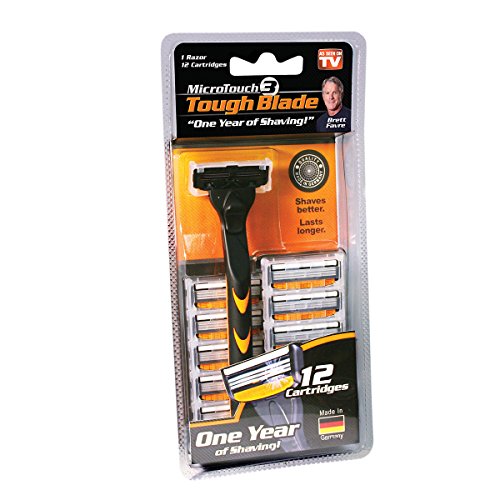 Both the Micro Touch Safety Razor Chrome and Micro Touch Tough Blade Triple-Blade Razors claim to provide individuals the best and cleanest shave that they need at a fraction of the cost that leading razor brands charge.

Both razor brands come with 12 refills that can last for a whole year’s worth of shaving if you regularly change your razor or razor refills every month. These products are great to try if you are growing tired of finding the right razor from the top brands in the market.

Are Micro Touch Razors For You?

Micro Touch razors can provide a clean and close shave even without the high number of blades in a single razor. For people who are more comfortable with the old-school razor type and would like to try their hand using a single-blade razor, the Micro Touch Safety razor promises to provide great shaving once you get used to using it.

However, those who are more at ease with using the more recent razor shapes and model, the Micro Touch Triple-Blade is still a good buy that lets you save cash.

I use to watch my dad shave every morning before he went to work. When I was old enough to shave all I could think about was using an old school straight razor as my dad did. I want to share all I know on this blog about shaving and using razors. I love sharing and writing about this lost art.